You may not be aware quite how much it costs us to dispose of your rubbish – around £7500 a year. It seems a real shame that people cannot simply take their litter home – it is, after all, the responsibility of those generating the litter. Sadly, it means £7500 that can’t be spent on site maintenance.

Therfield Heath is a nationally important nature reserve. It supports and incredible diversity of rare flowers and insects. In early June, we found a shieldbug that has not been recorded in Hertfordshire before. In July, the Chalkhill Blue butterfly will be on the wing – a butterfly that is dependent not only on its larval foodplant (Horseshoe Vetch) but also on ants to look after it during its underground chrysalis phase.

This the second update from The Conservators of Therfield Heath & Greens and with improving weather comes increased usage by all which has meant that the introduction of signs has been made to help. 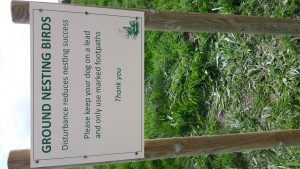 Lankester Hill
You will have seen four new signs have been placed to protect the ground nesting birds on Lankester Hill. Meadow Pipits and Skylarks are in abundance until July so we ask that to stop dogs quartering either take a wide berth or have them on a lead in this area.

Church Hill & Jubilee Wood
It is a sad fact that some people cannot respect nature and we have had instances where the rare Pasqueflower has been dug up by collectors and this is illegal and liable to prosecution, if you know who it is please notify the Police.
Jubilee Wood now has an abundance of flowers and we ask that you stick to the paths whilst walking through.
Sheep
The sheep will return to the heath in June. We will keep you up-to-date with their whereabouts via The Listing, the map on the Heath Sports Club our website and social media.

The latest update from The Conservators of Therfield Heath & Greens finds us in the height of summer having had most of June and July without rainwater. This has had a major effect on the grasses which like everyone’s garden has turned brown and the ground under foot is very hard and is a potential fire hazard.
The lighting of fires is a criminal offence and is liable for prosecution and common sense would suggest that any naked flame is dangerous on such dry ground and we prefer not to have even more signs out to spoil the view.
It’s been a fabulous year for butterflies so far on the Heath – with good showings of Chalkhill Blues, Dark Green Fritillaries, Marbled Whites and many more. We have seen many Lizards but none as big as the nesting Monitor Lizards found in the woods which caused the RSPCA to be called out. A big thank you goes to the keen eyes of the dog walkers who are our eyes and ears.
With the summer holidays well under way people using the Heath for picnics need to be considerate of where they are and please make sure you take your rubbish home with you. It costs the Conservators 7.5k PA to remove rubbish and dog bins.
A few instances of holes being dug & BBQs being lit up on Church Hill means we politely ask that no one picnic here as it is the most important & ecologically sensitive nature area for rare flora on the whole Heath. There are of course plenty of other places on the Heath to enjoy the views and have a picnic
The signs placed to protect the ground nesting birds on Lankester Hill have now been removed. Both the Meadow Pipits and Skylarks had a successful breading season and we thank everybody for their consideration.
Meanwhile the hot weather delayed the introduction of the Sheep until July and they have not been very happy up on Penn Hill (map included) In fact the owner has had four occasions where the sheep have been disturbed and broken from their enclosure and meant that they were removed for their safety until further notice.
We will keep you up-to-date with their whereabouts via The Listing, the map on the Heath Sports Club our website and social media.
Our next volunteer task will be ragwort pulling, as agreed with Natural England. Ragwort is deemed harmful and we have a duty to keep it under control and not to allow it to spread. We will not aim to eradicate it because it is not without its ecological benefits and we won’t remove those that are already being eaten by caterpillars. Please remember, it is an offence for anyone to pick or uproot any plant on Therfield Heath unless prior agreement is obtained from Natural England.
Finally, The Friends of Therfield Heath & Greens championed by Rod Kennedy have met and appointed a committee. They will be launching at the Kite Festival on August 5th and will be looking to recruit volunteers who are passionate about the future of Therfield Heath, so please come along and say hello to the team.

The Conservators of Therfield Heath & Greens held their first ever public forum in April at Royston Town Hall, with over eighty people attending.
The forum was to encourage interaction with the users of the Heath. “Friends of Therfield Heath” was proposed & well received. As were presentations from Grazing, Dog Poo Patrol, Archery, Golf, Cricket, Rugby, Heath Sports and the Police.
John King, chairman of the Conservators, advised that with Royston expanding and the increased usage of the Heath, “Education” was top of the conservator’s agenda and work had already started on improving the level of communication to the users of Therfield Heath with further public meetings planned.
Dogs
We are asking for dogs to be kept on leads in the Lankester Hill area while the ground-nesting birds attempt to breed (until the end of July). Breeding success is severely reduced by disturbance; the more they are scared off their nests, the lower their chance of success. We have populations of Skylarks and Meadow Pipits – the Skylark is on the UK red list (highest conservation priority), while the Meadow Pipit is on the amber list – so both need as much help as we can give them. Please do your bit to help by respecting signs requesting dogs to be on leads.
Sheep
The sheep will return to the heath towards the end of May/beginning of June. We will keep you up-to-date with their whereabouts via The Listing our website and social media.

With the continuded very hot dry weather please take extra care on the Heath. Of course all fires and BBQs are against the byelaws but please ensure all cigarette butts are cold and placed into a rubbish bin.

After many difficulties, the sheep have left the Heath. We hope this will only be for a short time.

The sheep are on Penn Hill in the west of the Heath.

Please keep all dogs on leads when in the area.